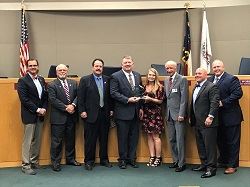 Mr. Joel Long, a lifelong Gaston County resident, has devoted numerous years to the advancement of our County. He has been described by his colleagues as a steadfast and engaged advocate of economic development and responsible growth and for having a "tremendous drive to lead and do the right things toward making Gaston County the best it can be".

He is the co-owner and CEO of GSM Services in Gastonia, is the President of Commercial Divisions, and is the License Holder for HVAC and Roofing in North Carolina and South Carolina.

Over the years, Joel has played a vital role in many strategic initiatives through his service to various boards and committees in Gaston County. He is a past member of the Travel and Tourism Advisory Board, where he also served as Vice-Chairman, and he is a current member of the Economic Development Commission. He is also a long-term member of the Gaston Regional Chamber of Commerce, serving as Chairman in 2013. He served as Past Chairman to the Greater Gaston Development Corporation (GGDC) and continues to serve on the Executive Committee.

His vast experience and business acumen have been a true resource to the many organizations he has served. For over four years, Joel, a charter member of the GGDC, has worked as the point person for the Gaston Outside (GO) campaign, including service on the GO Steering Committee. He has devoted countless hours to every aspect of the GO campaign, from the original effort to secure buy-in and financial support for the campaign, to weekly oversight. His dedication and leadership and his engagement with GO partners, Public Relations professionals, community leaders and GGDC staff have been key components to the success of the GO campaign.

Joel's advocacy for responsible and smart growth spurred his involvement in the GGDC's efforts to develop the Gaston County CLT Airport Economic Positioning Strategy, serving on the Steering Committee for that groundbreaking public-private initiative. Most recently, he served on the Gaston Economic Development Strategy Committee which seeks to improve the effectiveness and broaden the scope of the various economic development activities of public and private organizations in the County. Following that Committee's report to the Board of Commissioners, Joel once again volunteered to serve on the follow-up committee which is charged with the oversight of an Economic Development Study.

Joel, your willingness to serve is truly inspiring, and as a colleague recently stated, you are "a shining example of a man who doesn't just talk the talk but who truly walks the walk".

The County Commission is most grateful for your vision and innovative approach and for your continued efforts to make Gaston County a better place to live, work and play.