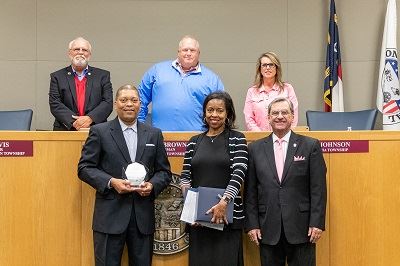 Dr. Harris has provided outstanding care to Gaston County citizens for more than three decades.  After completing his residency in Michigan, the Greensboro native moved to Gastonia in 1990 and founded Gaston Women’s Healthcare (1990-2007).  He has been with CaroMont Women’s Health since 2007.  During his professional career at CaroMont, he has served as Chief of Medical Staff, Chair of the Credentials Committee, Medical Executive Committee and Chair of the Department of Obstetrics.

As a dedicated public servant, Dr. Harris has spent many years rendering his expertise, care, and knowledge to various organizations.  He currently holds seats on the Board of Visitors for UNC Chapel Hill, the Warlick YMCA Advisory Board, the Gaston Vision 2040, and 101 Black Men for Highland. He has also served as the Gubernatorial appointment to the CaroMont Health Foundation, the Gubernatorial Appointment to the NC Museum of Natural Science, the NC Sickle Cell Council, the Board of Directors and Alumni Association of the University of North Carolina at Chapel Hill, the Alliance Bank and Trust Board of Directors, and the John Motley Morehead Scholarship Selection Committee.

Dr. Harris has served diligently on various Gaston County boards, including the Commission on the Family, CaroMont Health Board of Directors and Health and Human Services Board.  As a member of the Gaston County Health and Humans Services (HHS) Board, from 2013 until 2022, he was known for his thoughtful and impactful contributions to the Board.  When asked about his service, a colleague recently remarked that “he is exactly who you want to be sitting at the table to help you make critical decisions about the care of patients, the direction of the department, and for the improvement of public health across the entire community.”

His visionary perspective and compassionate patient care has earned him numerous prestigious awards.  He received the Physician Recognition by Nurses Award in 2002, the 2006 Partner in Caring Award – Gaston Memorial Hospital, the Best of Gaston Obstetrician & Gynecologist Award 2013, 2020, 2021 and 2022, and  the Gaston’s Best Doctors Recognition 2012, 2013, 2014, 2015, 2016 and 2017.  His honors also include the John Motley Morehead Scholarship, University of North Carolina at Chapel Hill, the Outstanding Junior Resident Award, Wayne State University - OB/GYN Dept., and the Harvey Beech Alumni Award, University of North Carolina at Chapel Hill.

Dr. Harris is a member of Kappa Alpha Psi Fraternity, Sigma Pi Phi Fraternity and was a Panelist/Speaker at the Young Black Leadership Alliance Career Forum in 2018, Co-organizer of the Mental Health Forum at Tabernacle Baptist Church in 2018, and a Mentor for the Delta Sigma Theta Sorority Mentorship Project (2016-2017).

Kelvin, the County Commission is honored to present you with the 2022 Judge William Gaston Award in recognition of your compassion, devotion and professionalism.  As one of our finest medical doctors, we are indebted to you for your many years of service and for your continued efforts to make Gaston County a better place to live.